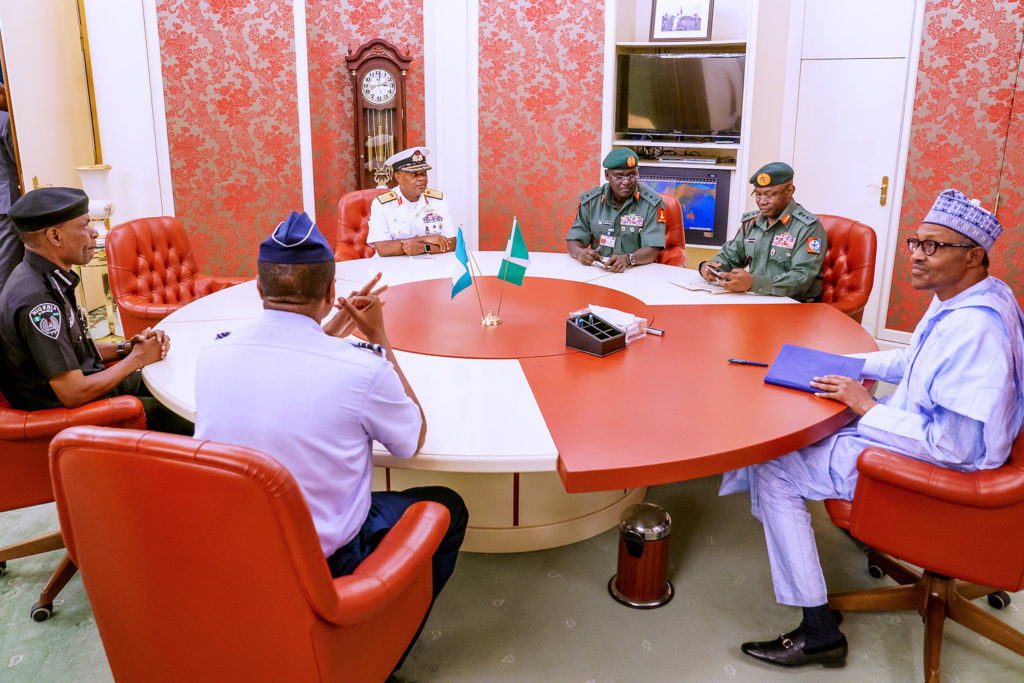 Elders in the country have asked President Muhammadu Buhari to respect the resolutions of the National Assembly and majority of Nigerians on replacement of service chiefs over the nation’s state of insecurity.

They explained that the growing state of insecurity across Nigeria necessitated the need for them to reiterate their earlier position.

Noting that the security heads were not indispensable, the elders regretted that their inability to contend insecurity since their appointments had portrayed the federal government being led by the All Progressives Congress, (APC ) in bad light.

The elders under the aegis of Conference of Concerned Nigeria Elders,in a statement, tasked the president to see reasons with the overwhelming calls by majority of Nigerians as well as recent resolutions of the two chambers of the National Assembly for the sack of the service chiefs for efficient security management in the country.

Expressing concerns over the adamant posture of the president in relieving the security heads and replacing them with those they referred to as “efficient hands”, the elders insisted that it was time for President Buhari to act to save the lives of Nigerian citizens and their property.

The elders particularly said it found the president’s inaction over sack of service chiefs and implementation of some far-reaching resolutions of the National Assembly on insecurity very disturbing.

Noting that the issue of security of life and property was “deteriorating on hourly basis”, the group decried “Mr President’s deliberate refusal to act according to the demands of Nigerians.”

“We found President Muhammad Buhari’s inaction over the sack of the service chiefs and other recommendations on security very disturbing and abnormal hence, we passionately appealed to him to rethink and save the country from further loss of lives and property,” they stated in the statement.

They explained that:”We issue this statement to state our position on a pertinent national issue that has become embarrassing to our dear country and which has put us to shame even among our immediate brothers in the West African sub region.

“It is the issue of security of life and property which is deteriorating daily, and which Mr President has deliberately refused to act according to the demands of Nigerians.

“We wish to categorically say that it is not normal for a whole country to be speaking with one voice that the service chiefs should not only be sacked but also that the entire security architecture be rejigged, and Mr President would remain adamant and less concerned.”

According to the elders,”Nigerians are tired of the alarming insecurity in the country and the seeming inaction of Mr President in addressing the situation.”

The elders who expressed fears that Nigerians may resort to self help if nothing was done urgently, insisted that,”Those responsible for actions or inaction which has heightened the insecurity must go and new and effective hands injected into the system.”

According to the Conference of Concerned Nigeria Elders, it was time for President Buhari
to relieve the service chiefs of their positions to save the country of what they called “continued embarrassment” of his administration.

Insisting that they were worried over the state of insecurity which according to them, was not getting better in spite of the relentless efforts of the president to that effect, they feared that the ugly security situation may not guarantee food security in the country.

They charged the president to rise to the occasion by hearkening to what they called the “voice of majority” that new hands were needed to pilot the affairs of the country’s security architecture.

“The Conference of Concerned Nigeria Elders wishes to appeal to our dear President and Commander-In-Chief of the Armed Forces, President Muhamamadu Buhari to as a matter of urgency, sack the current service chiefs without further delay.

“Our position is because we have seen that the president may lose the support of Nigerians over the embarrassing security situation we are facing if he doesn’t act fast enough,” they reiterated.

The elders said:”We are very disturbed over the president’s continued refusal to sack them despite call by most Nigeria’s in the midst of the disturbing insecurity in the land including the home town of our president.”

According to the statement,”No part of Nigeria is safe today.”

While it said it was not unaware that “Mr President gets daily briefings on the security situation in the country by the security heads, the elders however, said “most of those reports are not true reflections of the situation on ground.”

ALSO READ: Military gears up to stop insecurity in 2021 — DHQ

The statement claimed that,”Already, there is low morale in the military over the continued stay of the service chiefs whose tenures in their various offices have since lapsed.”

“We appeal to the president to hearken to the call by majority of Nigerians as reflected in the country’s parliament recently that it’s time for him to do the needful”,the statement read.

While observing that,”We are in a democracy where any decision of government or leaders is taken from the popular view”, the Conference of Concerned Nigeria Elders, noted that “majority of Nigerians have since spoken in this regard and as a democrat, our president should listen.”

They regretted that the president’s action had caused what they considered as “serious career stagnation in the Nigeria Military.”

“The service chiefs are not indispensable. Nobody knows it all. They need to leave now and give room for younger ones with new ideas and vigour”, the statement stressed.


No Responses Yet, Be The One To Response First